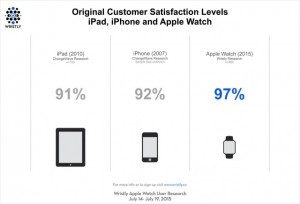 It is said that the wearable Consumer Satisfaction Rating report aimed at the research of 2,696 consumers who purchased wearable device from June, 2015 to June, 2016. The Standard for Evaluation involved in usability, battery life, comfort level, mobile connection performance,price, durability, size of screen, appearance design, reliability, applied ecosystem and consumer service.

J.D. Power pointed out Apple Watch is doing beter than other wearable devices in comfort level, appearance design and usability. While Samsung Gear has advantages in consumer service, size of screen and mobile connection performance.

19% of interviewees claimed that they encountered problems when using wearable devices. The most common issues focus on charging problem and user personal setting.

It is worth noting that Pebble did not list in the research by J.D. Power. Besides J.D.Power, Wristly also did the similar researches on wearable devices. The research result of consumer satisfaction rating made by Wristly was 97%, which quoted by Tim Cook at Apple new release conference.