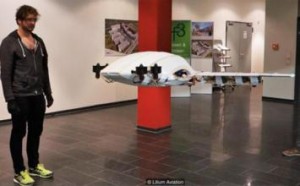 This startup is called Lilium Aviation which locates in Munich, Germany. It was established two years ago. On Monday, Lilium Aviation received the investment fund of € 10 million from Atomico and other investors for the launch of vertical lifting private aircraft.

The flight distance of Lilium per test is expected to reach 300 kilometers, and the max speed per hour is expected to reach 300 kilometers. The meaning of producing such vertical lifting aircraft is to realize the air travel between two cities. This transportation tool will be faster than any other public ones. It is said that it will take under 15 minutes from San Francisco to Palo Alto, and one hour from Munich to Frankfurt.

Zennström said at TechCrunch Disrupt conference :” This is the perfect example that founder avails of advanced technology to solve major events.” He becomes one of the membership of Lilium board of directors.

There are many traffic jams we encounter every day. We also face the problem of air pollution and global warming. It may be an effective solution to produce air transportation tools in the future.