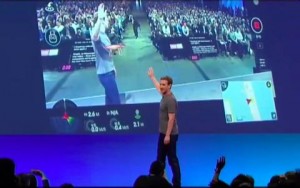 Facebook Live is not just broadcasting the videos. It has a picture that users can search videos from all over the world. The new feature allows users to use the filter when playing videos. Facebook Live combines with Facebook Reactions.

Reactions is biggest product that Facebook released in the past few years. However, most of flaring features of Reactions are similar with other websites’. Speaking of it Live video, Facebook also replicated or imitated the live video features from Periscope, Meerkate and other websites.

Mark Zuckerberg explained the differences between Facebook Live and Periscope live video when he was interviewed by Buzzfeed News last week.

His answer was simple, Facebook has audience while Periscope doesn’t. It offers convenience for users to search friends though they just wish to share videos with them.

Facebook and Periscope are close functionally, but the former is mot popular and welcome by the public. Its applications are easy accepted without promotion.

However, not all video formats will be supported. Fortunately, users can transform the static profile pictures into the dynamic images through some third-party apps including Vine, MSQRD, Boomerang and so on.

If you are interested, please draw attention to learn more Facebook news concerning the new apps and features.