The release of Universal Windows Platform is one of hte most important&risky plans for Microsoft CEO Satya Nadella. UWP is a newly platform launched by Microsoft. This platform is made for developers to develop new apps on different devices. 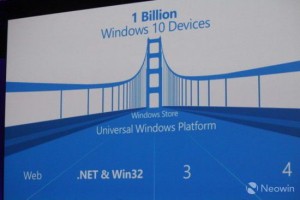 UWP was mentioned a few times at Game Developers Conference held in San Francisco. It will be introduced at Microsoft Build developers conference later this month.

UWP allows the application that is edited by developer once to run on any Windows 10 devices, including desktop, iPad and smartphone. UWP will be soon compatible with Hololens and Xbox One.

Not every person loves UWP. Microsoft former CEO Steve Ballmer felt such platform isn’t practical. Tim Sweeney claimed that UWP is the most radical measure made by Microsoft. The developers are not so interested in UWP except Facebook and Uber.

Millions of developers are familiar with Microsoft’s old technology, but they are not considered to be accessed as the touch-screen devices.

If the developers are persuaded to use UWP on Windows 10 pc and iPad, it will be compatible with Xbox One and Windows 10 smartphone then. Developers don’t need to make many changes for their applications.

To developers, the release of each new device means the selling opportunity for its related application.

There will be limitation for the popularity of UWP as users could only download it from Windows Store. Microsoft will charge 30% as its commission.

Microsoft claimed that it will introduce more details at Build conference later this month.