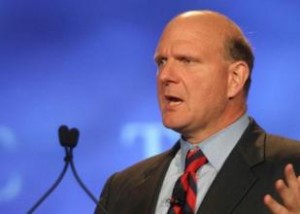 At a dinner party organized by Fortune magazine, Steve Ballmer claimed that his standpoint was right then. Linux makes less threat to Microsoft now.

He added:” Microsoft obtained reasonable income through this competition. It consolidates the leading role of Windows system and means a lot to Microsoft’s revenue.”

Microsoft becomes softer with Linux recently. Last week, it even announced that it will sell the SQL Server which is compatible with Linux.

Ballmer is happy with this act. He emailed Satya Nadella for supporting this decision. He pointed out at the board last December that the company should carry out information transparency policy. He felt that the revenue and profit of each department should be transparent.

He was appointed as CEO in Jan, 2000. The scientific shares declined sharply in the following years due to the destroy of internet bubble. During his term, Microsoft stock price declined by over 40%.

While Microsoft share price increased by over 50% since Satya works as Microsoft CEO in Jan., 2014.

Satya made great achievement during his term. Ballmer considered one of the reasons for his success is change of market sentiment.

Ballmer admitted that the friendship with Bill Gates is no longer close. He enrages in doing yoga after he left Microsoft. He feel it is amazing to do workout, meditation and relaxation.