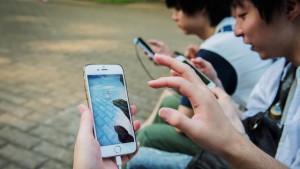 Pokémon Go, a AR mobile game, becomes the highest downloads and revenue at App Store. It sound funny that Tim Cook read Pokémon as “Pokey-man”| when he mentioned it at the meeting.

The popularity of Pokémon Go attracted Apple’s attention. Tim Cook described Pokémon Go as a phenomenon and unbelievable. He claimed that Apple would avail of AR technology to develop its business. Cook said:” We have already invested a great sum of money in AR field and will keep going. We think highly of AR technology and assume it could resonate with consumers and has great potential market.”

TechCrunch reported that Apple acquired an AR company named Metaio last year. So far, Apple seems to leave behind Alphabet in AR field. Niantic Labs, developer of Pokémon Go, was split off from Alphabet. Alphabet has been investing on Niantic Labs and it teamed up with Lenovo to launch a high-tech sensor Tango for smartphone. Alphabet has advantages in developing AR technology.

Though Apple has no desire to develop in AR field, it still benefits from Pokémon Go. It would get 30% of dividends from iPhone players of Pokémon Go. Laura Martin predicted it would benefit $3 billion from Pokémon Go in two years.

The earning reports that Apple released on Tuesday showed it got $ 6 billion in revenue from software business and services business. It stimulated Apple stock share increased by 6% after trading hours on Tuesday.